The training was proposed because of the needs identified in the initial assessment dating back to the year 2016. In August 2016, CCOUC team had conducted an initial health assessment through interviews with major stakeholders of the Susong Farm in Sinujiu. After the assessment, the team had made recommendations such as the training of community members to promote better understanding of the health risks associated with specific disasters as well as the preparation of disaster preparedness kit for the local counterparts.

In the afternoon of 12 March 2018, the team revisited Susong Farm and deployed the training on H-EDRM in a training room at Susong Farm. Mr Cheuk Pong Chiu first introduced the Sphere standards to the 25 participants, which outlines sets of common principles and minimum standards in life-saving areas of humanitarian response. These participants are medical practitioners including village doctors and nurses, teachers of the local school and farm committee members of the Susong Farm and Ryonghung Farm. In view of the increasing number of villagers having high blood pressure, messages on the prevention of hypertension such as less salt intake, less alcohol consumption and cessation of smoking were disseminated. Besides, Mr Liu guided the audience to make the oral rehydration solution (ORS) which can prevent dehydration while having diarrhea, a common concern amongst the audience. In addition, the disaster preparedness kits that contain dynamo torches, whistles, emergency blankets, water containers and soaps were introduced by Ms Wong as a key tool to strengthen local disaster resilience. The kits were distributed amongst the audience after the training and were also sent to the 492 households in Susong Farm within weeks after the training. Immediately after the Sphere standard training, Mr Chiu conducted a separate session for the medical practitioners in both farms to review the use of first-aid and medical equipment as well as the management of medicine.

The trip was concluded by a visit to Ryongchon Hospital. This county-level hospital has 27 wards and has been serving 140,000 people of the county. In addition to paying visits to the Departments of Surgery, Accident and Emergency,and Ear, Nose and Throat of the hospital, the team also held a meeting with the hospital’s leadership to understand the current health status of the community, for example, the prevalent diseases and the patient referral system.

It was a meaningful trip for the team to implement and evaluate the progress of the recommendations, and have a more comprehensive understanding of the health system of the country. 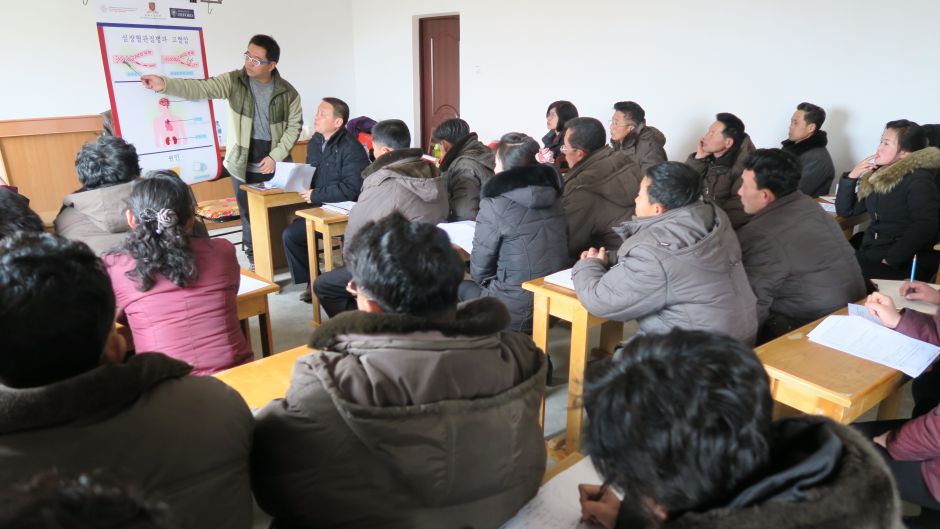