Three professionals from Bhutan, Mr Kumar Pradhan, Mr Dorji Tsherub and Mr Sonam Tobgay B shared with the audience on how the country tackles the frequent local disasters in this lecture jointly hosted by Collaborating Centre for Oxford University and CUHK for Disaster and Medical Humanitarian Response (CCOUC) and the CUHK Centre for Global Health on 7 July 2016. The speakers attended CCOUC summer courses on disaster and humanitarian crisis, and climate change and health under the Hong Kong-Bhutan Humanitarian Medicine Training and Exchange Programme to acquire the relevant knowledge that would benefit the country when they returned afterwards.

To kick start the lecture, Mr Kumar Pradhan, Head of the Commerce Department at Ugyen Academy in Bhutan, gave a brief introduction on this beautiful kingdom. Known as the happiest country in the world, Bhutan promotes Gross National Happiness (GNH) as the holistic and sustainable approach to development. Apart from aspects like socio-economic development, the Bhutanese government also puts great emphasis on other important elements including her ecological resilience, as well as people’s physical and psychological wellbeing.

Located at a hazard-prone area in Himalayan region, it is of paramount importance for Bhutan to cope with various disasters effectively. An overview on the country’s disaster profile as well as strategies to mitigate disaster risk was then delivered by Mr Sonam Tobgay B, District Disaster Management Officer. All kinds of disasters, including earthquakes, Glacial Lake Outburst Floods (GLOF), floods, fires, landslides, windstorms and others have aroused great concern amongst the audience. .

Mr Sonam Tobgay B illustrated that a huge number of infrastructure and houses in Bhutan were destroyed during the 2009 Bhutan earthquake and 2011 Sikkim earthquake with magnitude of 6.1 and 6.9 respectively. Although there were not many casualties, he emphasised that earthquakes often lead to secondary disasters like GLOFs – with the situation being worsened by global warming effects. Since 1994 when one of the gravest GLOFs occurred, the Bhutanese government decided to implement a series of adaptation and mitigation measures to reduce climate change-induced risks. Through these efforts, Mr Sonam Tobgay B hoped that the hazardous impacts brought by GLOF would be minimised.

Apart from dealing with the disasters inside the border, Bhutan is also enthusiastic towards providing assistance to neighbouring countries when facing hazards. Mr Dorji Tsherub, Disaster De-suup Coordinator, shared his experience as a member of the Earthquake Relief Medical Unit (ERMU) in the 2015 Nepal earthquake.

All in all, this inspiring lecture allowed the audience to gain an insight into the Kingdom of Bhutan, and more importantly, to view disaster preparedness and response from a different cultural perspective. As one of the participants put it, ‘I appreciate this opportunity to be in this global classroom’. 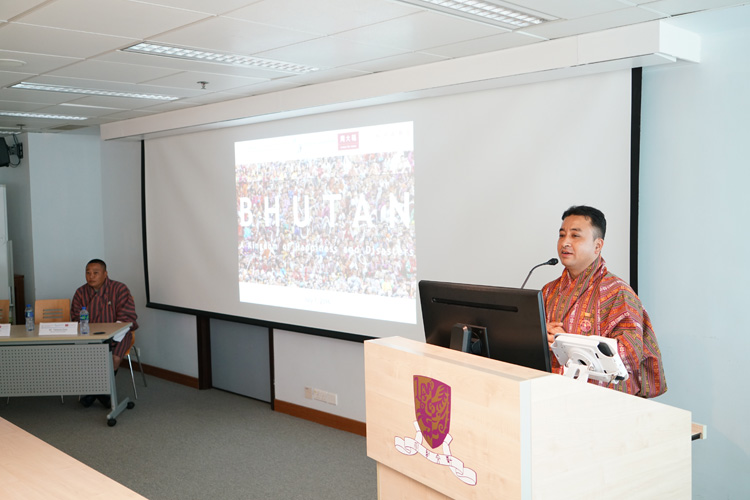 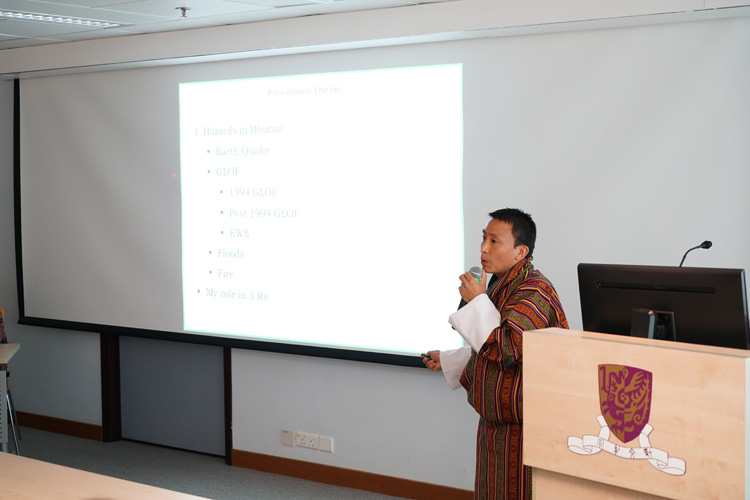 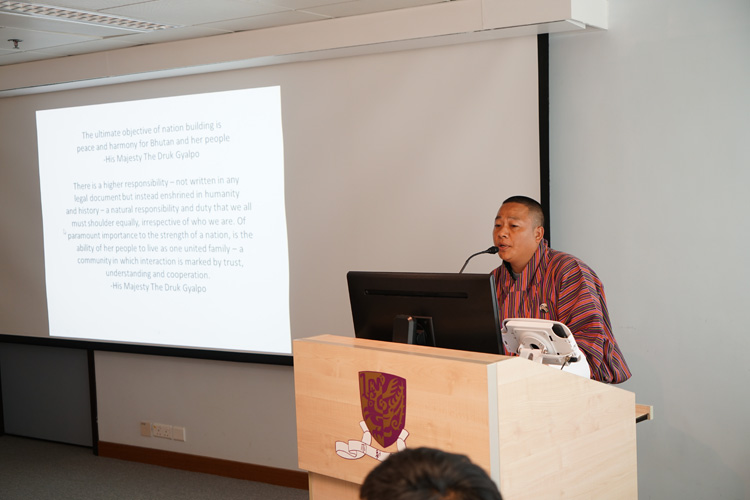